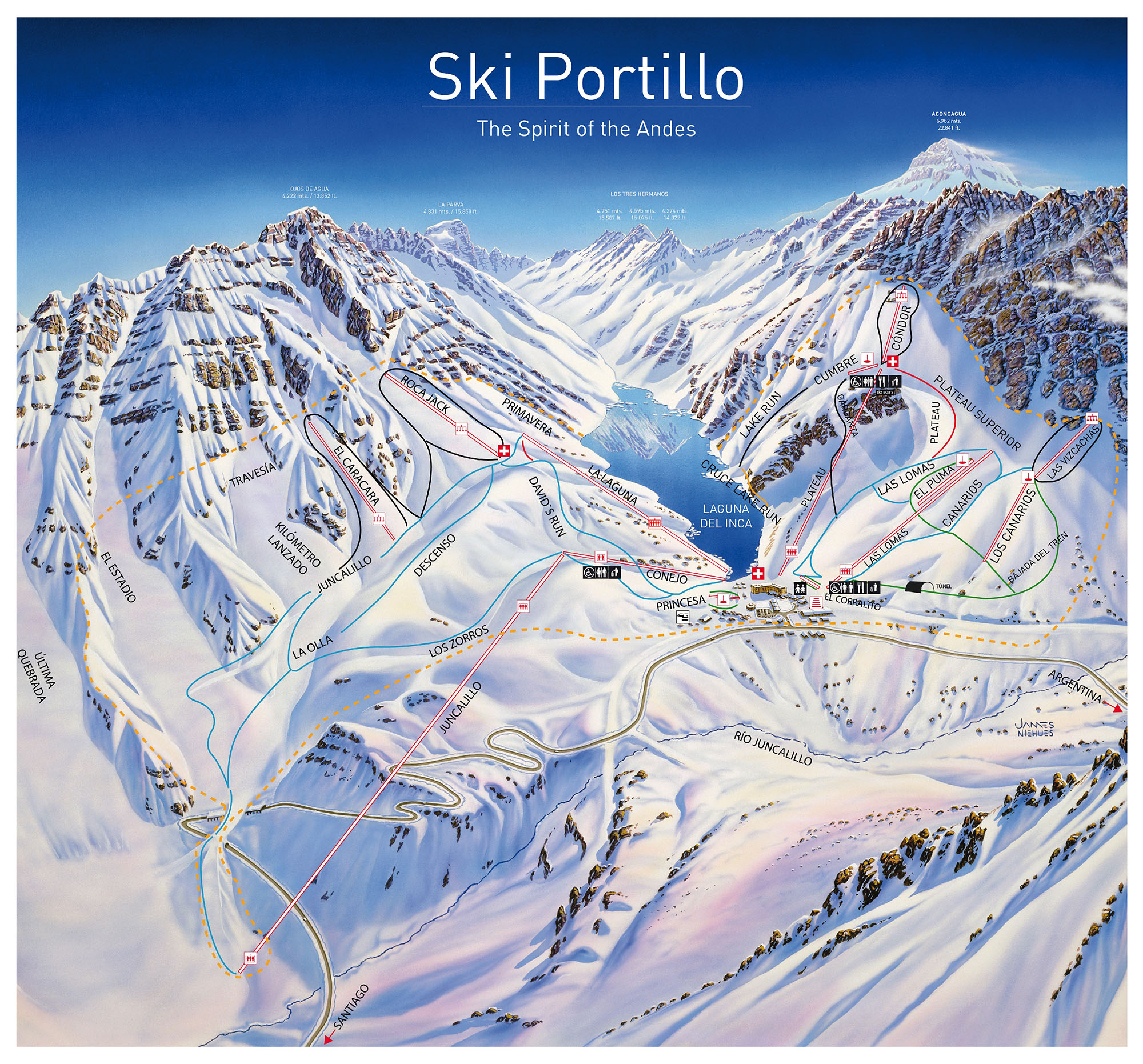 Portillo is the only ski center in Chile that uses the Canadian and North American system to prorate the slopes, so we will find only green, blue and black tracks. There are no red runs as in all other resorts in Chile.

Due to the "V" shape of the center and its location with respect to the sun, it is generally during the morning that the whole of the west is skied (Roca Jack, Juncalillo, Caracara, etc.) and in the afternoon skiing the Plateau area (Plateau, Condor, Las Lomas, Vizcachas, etc).

Leaving the hotel, we will immediately be in the snow and in front of the Laguna Del Inca. To the left in relation to the hotel, the first lifeline will be La Laguna that works as a link to all the tracks and levitators of the sector. Coming up we go left and you will reach Roca Jack, one of the "va-et-vient" lifelines that seem deep by their shape. These lifelines were placed in the center due to the large amount of avalanches in the area, which makes it impossible to have lifts that have towers (they are anchored to the mountain). These lifts should only be used by people who have a good level of ski since they are potentially dangerous if the directions are not followed (in the hotel you will find pamphlets with the instructions) and ask the operator in case of doubts.

Returning to Roca Jack, the track is quite steep and wide, allowing a good pair of spins at high speed. It is necessary to consider that this is one of the sectors that are conserved in their natural state and the tracks are not trodden with machine nor intervened. Roca Jack offers us access to numerous off-piste, within the most aggressive of all Portillo. The most extreme of them is Super C a couloir (narrow throat) that is accessed from the highest Rock Roca. To get there you need to take the lift and then climb up a piece and then walk with the skis in the backpack for 2 to 4 hours until you reach the top (depending on your physical condition). Above you will find a very narrow gorge (couloir) which then opens until you reach the track El Estadio. Super C is one of the most difficult areas that can be accessed from the center and is considered outside the ski area, so I recommend that only experts access and always with at least one companion in case of emergency. Super C is outside the ski area and is not a patrolled area, so it is your responsibility as a skier to take the necessary precautions to avoid an accident. In case of occurrence, patrols will be slow to arrive.

From the top of Roca Jack we can also access spring, which is to the right. To reach this area it is necessary that the snow conditions allow it, as it must pass through rocky and narrow sections. To the left of the summit there is a small pass that allows making a trip to El Estadio, passing also Caracara and Kilómetro Launched.

Past Roca Jack is El Caracara, another "Va-et-vient". It does not always work since Roca Jack provides access to this area. Through Caracara we also have access via a crossroad to Kilómetro Launched and El Estadio. Once we reach the base of the lifeline we will arrive at Juncalillo, the longest in the center. It is a blue track, with intermediate difficulty and very long to practice turns or do ski exercises. The fun of this track is that you ski on the international road as it passes over one of the road sheds. When we get down, we will take the Juncalillo (same as the trail) walkway that is long and slow, so you will have time to rest. Once upstairs we will ski on the Princesa track until we reach a small trawl for beginners that also serves as a link to get to the hotel. Once at the base of the hotel we can turn right to take Plateau, which gives us access to the whole area east of downtown. Once at the top you can go up to Condor, another "va-et-vient" and through it we can access Lake Run that will take you to La Península. When the lake is frozen you can return to the hotel by walking or sliding on it; however this has not been frozen in the last 3 years. For when the lake does not freeze, the center made a small pass through the rocks nicknamed Camino Del Inca. In the Peninsula you will be very tempted to get your skis out and play for a while, so bear in mind that if you go down a lot (for example if you arrive at the lagoon) you will have to walk back up to the entrance of the road. Lake Run is one of the slopes with better view of the center, since from the peninsula you can observe the hotel and the lagoon, besides it feels as if you are going to ski to the lagoon (and it is). So cute. At the end of the way back you can ski to the plateau base. Again up, if we take Condor again when we reach the top we go to the right, we can cover the whole area called Plateau superior, with a little more slope than the same Plateau track and is preserved in its natural state.  Under this area we will find blue and green tracks, ideal for beginners and intermediate skiers.  There are two lifts, specially designed for the progression of the ski: El Puma and Las Lomas. Las Lomas is a chair that is just above the school, which makes it particularly easy for those who are ready to progress to longer slopes and with a little more slope. This lifeline as well as El Puma (entrainment) are of priority use of the School, although not exclusive.

About El Puma and Las Lomas is Las Vizcachas, another "Va-et-vient" that gives us access to black runs. This lifeline was closed for several years due to a malfunction; however the 2014 reopened and worked without problems. Under Vizcachas we find another trail for beginners: Los Canarios. This lifeline provides access to easy and entertaining tracks for children and adults. The main descent is called "descent of the train" and almost at the base we can ski through the Tunnel of Portillo, which is the old tunnel where the train passed when it still existed. While it is a children's day, I think I never had so much fun on a beginner track as I did when I went through the tunnel.

At the top of Plateau, on the left hand side we reach the mythical Tío Bob's, the mountain restaurant of Portillo. There you will meet the friends you have met during your stay at the hotel, as well as the friendly staff who will take care of you. Noteworthy and absolutely recommendable are the burgers they offer, in particular the Rogan Burger which is well accompanied by both a wine and a beer and best of all is that you do not need to carry money or cards with you, as everything is charged to the room (Although if you prefer you can pay directly there). If your stomach is not too heavy after Tío Bob's you can make a descent called Gargantita, which is just below the restaurant. It is for experts as it has a lot of slope and is quite narrow (it is a throat)

If you prefer to leave Tío Bob's in the traditional way, there is a small drag that will leave you on Plateau.