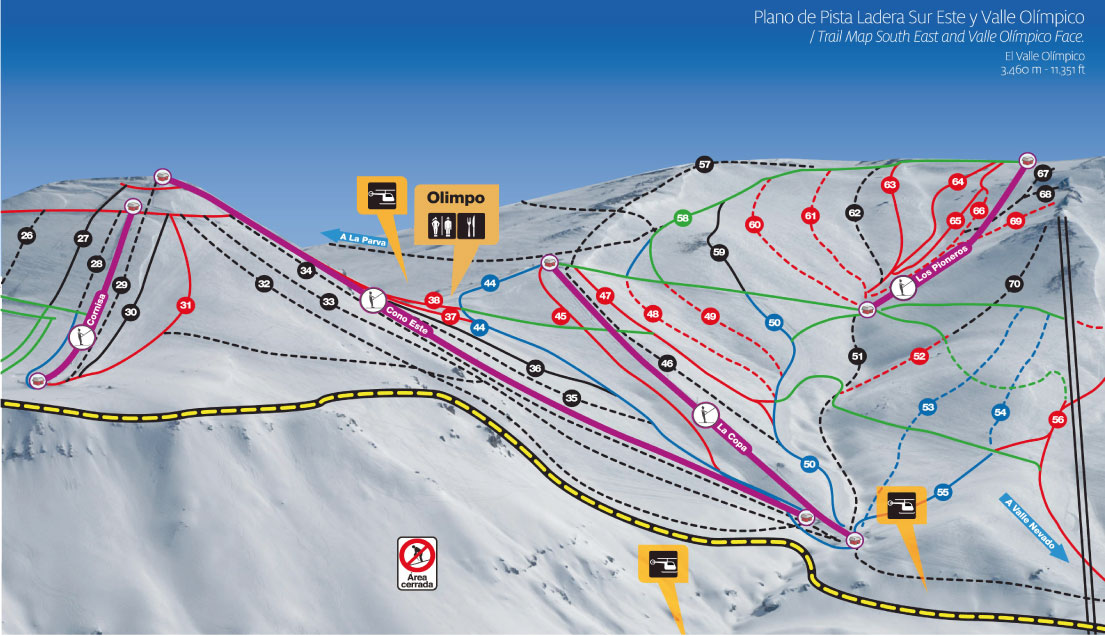 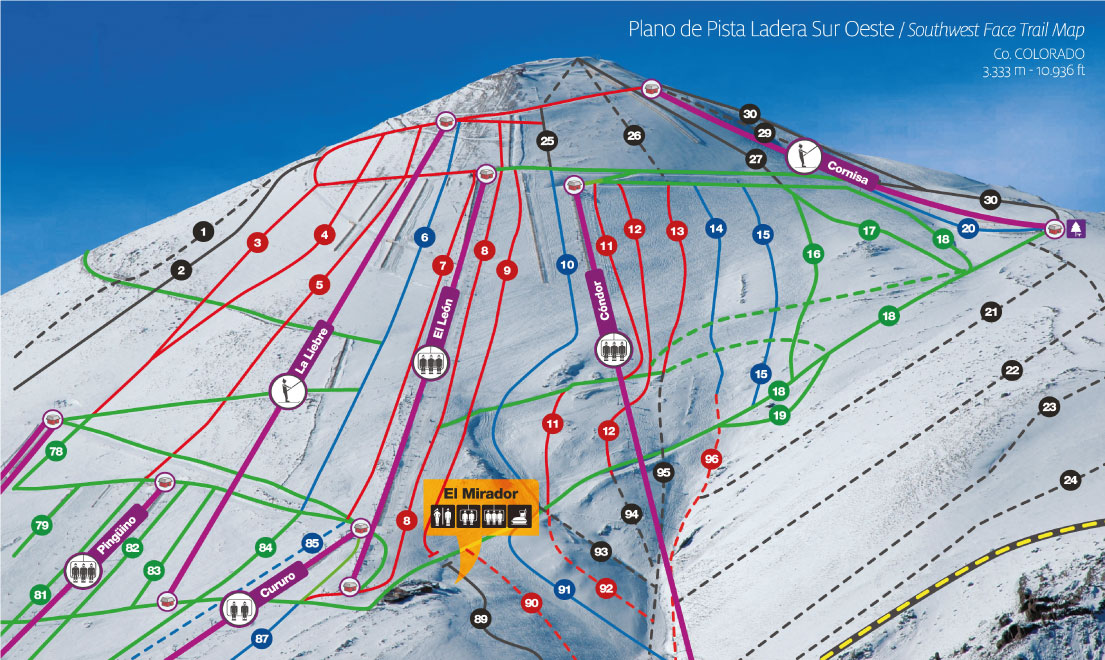 Colorado tracks are identified by numbers or names given to them by locals. To be located, it is easier to talk about the nearest cable car to the track in question. In Farellones there are tracks for beginners and intermediates, however within the map we can witness a new track called "Falso Embudo". If we look closely, this track is considered sidecountry (within the skiable area but not patrolled), so you should proceed with caution. It is important to check the snow conditions and the snow cover.

To get to El Colorado skiing, we must take the Embudo and after climbing a little we arrive at El Colorado itself via Los Zorros. From bottom to top, we have the sector Los Zorros, where one of the schools of both resorts operates (3 schools in total, Farellones, Los Zorros and Parador). All this corresponds to terrain for beginners and intermediate. Los Zorros will drop you off at the base of Colorado, near the Parador and the resort's service center. In front of the Parador we have 4 lifts: Colorado Chico 1 and 2, Penguin and Cururo. Colorado Chico provides service almost exclusively for the snow park, which is why the center decided to put two drag lifts together. In addition, the instructors of the school go around like the beginners, because the lobby immediately to the right has three exits that can be accessed without going to the top, thus creating a better progression for beginners. Although both are drag lifts, they are faster than the Pingüino chair on the right. From the Colorado Chico cable cars we can access all the terrain of the Pingüino cable car and more, but from the top of the Pingüino we cannot access the top of the Colorado Chico. This whole sector except the snow park is for beginners. Tip: Using the drag lift will always be much faster than a chair. In this area, you can basically access the same terrain by chair or drag so if you know how to use the drag well, my suggestion is that you do it because you will save time that you could use to go down the mountain.

When you get to the top of the Colorado Chico, if you turn left, you will come to one of El Colorado's best kept secrets: Yaretas (and access to La Parva as well). I say it's the best kept secret, because it's always empty. And that's why it's not always working, but when it is, it's a delight. This sector is widely used as training tracks, precisely because of the scarcity of public and the characteristics of the tracks (blue, wide and good for carving).

Returning to the base of the ski resort, to the sector Parador specifically, a little lower and to the right of the cable car Pingüino we will find Cururo, another chair as slow or slower than the Pingüino. This chair also serves as a panoramic chair (works that way only from 12:30 until 14:30, although sometimes these hours can be extended), but for skiers it offers direct access to very close to the Mirador restaurant and additionally serves as a connection to El León (chair) or La Liebre (drag).

El León offers entrance to a slightly more complex terrain than the one previously analyzed, through which we can access blue and red tracks, and with La Liebre too. In addition, there are quite a few training tracks in these areas and when there are slalom competitions, they are usually in this area. Generally the cable car La Liebre is used by runners because it is faster than the chair, and again, the trawling covers the same as the chair and a little more, so through La Liebre you can access the same terrain as with El Léon.

Continuing west we have the Cóndor cable car, another chair. Cóndor gives us access to a small valley, whose exit is through the chair. This small valley has tracks for all levels, and when there's good snow, the black tracks (which are generally not trodden) are spectacular. The downside is that it is a slow old double chair, so you may take some time to get out of there. Once we get out of here, we can go to the southeast slope of the resort, where we will find the cable car Cornisa, where the tracks are for advanced and expert, due to its steeply slope. Through Cornisa we can connect with the back of the resort, specifically with the Cono Este, another drag lift that gives us access to more tracks for advanced and experts, all good fun. Tip: between Cornisa and Cono Este is the area called Chanchitos considered off track, but within the skiable terrain. It's a lot of fun, it has a couple of very good natural jumps. The problem is that on powder days this is where everyone comes, so if you want to be first you need to get up early.

Following behind, after the Cono Este, we have the cable car La Copa, also surface. The entire rear area of the resort has surface lifts, which despite being faster do not allow you to rest your legs as in a chair. La Copa gives us blue, red and black tracks, depending on where you are going. For this sector, and if conditions permit, the second snow park of the resort is prepared; Also at the top of the cable car, on one side is the restaurant El Olimpo.

Continuing to the right, we finally have the Pioneiros cable car (named after the first skiers to reach this area of the mountain chain), which, among others, provides access to Valle Nevado. It is important to note that if you want access to Valle Nevado or La Parva, you will need the interconnection ticket or day ticket for each resort you visit. Unfortunately, the three resorts do not cooperate with each other to create a super pass with unlimited access to all 3 mountains, as it exists almost everywhere in the world.